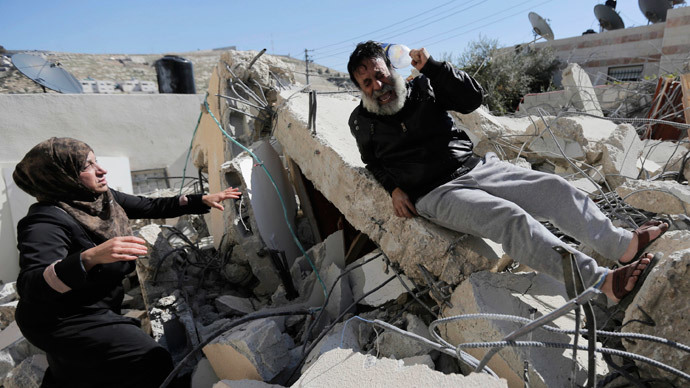 A Palestinian man reacts as he sits atop rubble after his home was demolished in Jabel Mukaber, a village in the suburbs of East Jerusalem (Reuters / Ammar Awad)

The UN Special Rapporteur on occupied Palestine accused Israeli authorities of conducting colonialist policies that constitute forms of apartheid and ethnic cleansing in the occupied territories in the West Bank and East Jerusalem.

Speaking at a news conference at the UN European headquarters in Geneva on Friday, the UN Special Rapporteur on occupied Palestine, Richard Falk, accused Israel of pushing Palestinians out of East Jerusalem and creating unbearable conditions for the minority to force them to immigrate.

In the present situation where talks between Israel and Palestinian authority remain in deadlock, the acceleration of Israeli settlement construction in the occupied territories is causing Palestinians to lose their faith that a state of their own could ever be created.

“Every increment of enlarging the settlements, or every incident of house demolition is a way of worsening the situation confronting the Palestinian people and reducing what prospects they might have as the outcome of supposed peace negotiations,” the UN Special Rapporteur said.

The report maintains that Israeli policies in the West Bank are effectively denying the Palestinian right to self-determination by means of “apartheid and segregation.”

“To sustain indefinitely an oppressive occupation containing many punitive elements also seems designed to encourage residents to leave Palestine, which is consistent with the apparent annexationist, colonialist and ethnic-cleansing goals of Israel, especially in relation to the West Bank, including East Jerusalem,” the report said.

For that purpose, the Israelis use bureaucratic processes, such as “revocation of residency permits, demolitions of residential structures built without Israeli permits (often virtually impossible to obtain), and forced evictions of Palestinian families,” which is a definite violation of the International Covenant on Economic, Social and Cultural Rights, said the report.

In Jerusalem alone, over 11,000 Palestinians had lost their right to live in the city since 1996, only because Israel has been imposing residency laws in favor of Jews, making it possible to revoke Palestinian residence permits, Falk reported.