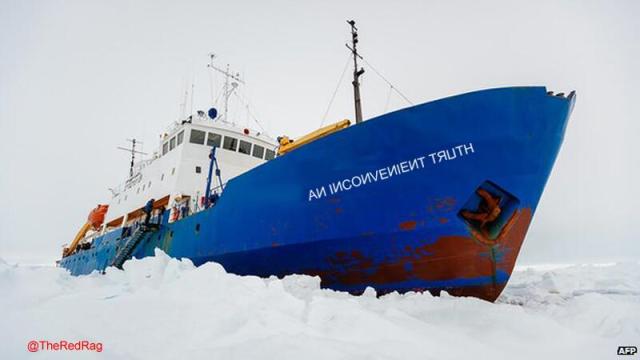 It is summer in the southern hemisphere and yet there is still signifiicantly above normal amounts of sea ice present as the passengers and crew of one tour ship discovered. The icebreakers Xue Long and Aurora Australis, and a French research vessel Astrolabe have all given up reaching the Akademik Shokalskiy for rescue, and a helicopter evacuation is now being ordered. This episode has taken on a heightened comedic fiasco-like quality.

Now, with such a fantastic failure in full world view, questions are going to start being asked. For example, with advanced tools at their disposal, such as near real-time satellite imaging of Antarctic sea ice, GPS navigation, on-board Internet, radar, and satellite communications, one wonders how these folks managed to get themselves stuck at all. Was it simple incompetence of ignoring the signs and data at their disposal combined with “full steam ahead” fever? Even the captain of the Aurora Australis had the good sense to turn back knowing he’d reached the limits of the ship on his rescue attempt. Or, was it some sort of publicity stunt to draw attention? If it was the latter, it has backfired mightily.

More on this story at Watts Up With That?

See also: Warmists Stuck in a Sea of Denial

This entry was posted in Climate Change and tagged Antarctica. Bookmark the permalink.