Although the Disbelievers Dislike It 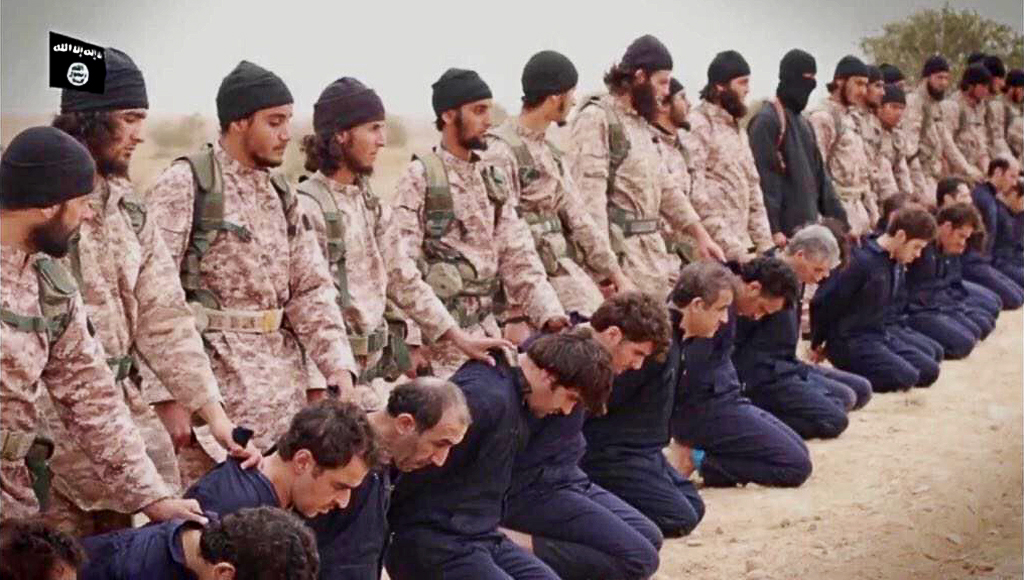 On November 16, 2014 the Islamic State released a 16-minute video that displayed the severed head of 26-year-old former U.S. Army Ranger Peter Kassig. The video was characteristically different than the four previous Islamic State beheading videos of American and British hostages by the man known as Jihadi John. Although there have been many previous videos of mass beheadings by various al Qaeda-linked groups and Islamic State militants, this film is unique in content and quality. The Islamic State is the first terrorist group to film and stage a formalized ritual mass beheading. Shot in high definition, slickly produced and edited with Hollywood precision, 19 jihadists simultaneously behead 19 Syrian air force pilots and military officers in a ceremonial ritual execution.

To Obama, the dog of Rome. Today we are slaughtering the soldiers of Bashar and tomorrow we will be slaughtering your soldiers. And with Allah’s permission we will break this final and last crusade. And the Islamic State will soon, like your puppet David Cameron said, begin to slaughter your people in your streets.

He points the knife at the camera during the threats to America. Then there is silence as the camera pans over the faces of the men who know they are about to suffer a horrible death and the faces of the executioners who are about to pledge their allegiance in sacrificial blood. Dramatic images and sound effects portray the moment as a sacred solemn rite. The camera fades to black and appears with Jihad John signaling with one word for the ritual killing to commence.

The next segment, also titled “Although the believers dislike it,” demonstrates how many individuals and groups from around the world have pledged allegiance to the Islamic State. The final segment at the 14:30 mark opens with the disarticulated head of American Peter Kassig at the feet of Jihadi John. The camera pans up Jihad John’s body and he makes the following statement in English:

This is Peter Edward Kassig, a U.S. citizen of your country. Peter, who fought against the Muslims in Iraq while serving as a soldier under the American army, doesn’t have much to say. His previous cell mates have already spoken on his behalf. But we say to you Obama … you claim to have withdrawn from Iraq four years ago. We said to you then that you are liars, that you have not withdrawn and that if you had withdrawn that you would return, even if after some time. You would return. Here you are. You have not withdrawn. Rather, you hid some of your forces behind your proxies and withdrawn the rest. Your forces will return, greater in number than they were before. You will return and your proxies will not benefit you. And we also remind you of the haunting words that our Sheikh Abu Musab al-Zarqawi told you. The spark has been lit here in Iraq and its heat will continue to intensify by Allah’s permission until it burns the crusader army in Dabiq. And here we are, burying the first American crusader in Dabiq. Eagerly awaiting for the remainder of your armies to arrive.

The video ends with the classic image of the jihadist carrying a large Islamic State flag across the land. Dabiq is a highly symbolic location which has historical and religious significance for Islam. The Islamic State has designated the place for the “Final Hour” where Armageddon will begin in an Islamic apocalyptic tradition that designates the West as modern-day Romans. That is why Jihadi John referred to president Obama as the dog of Rome.

Excerpt from an article by Dawn Perlmutter.

The video has been removed from YouTube, but can be watched here, or downloaded from this back-up site. Beware: Contains extremely graphic footage!

This entry was posted in Religion & Philosophy, Videos & Documentaries, War & Terror and tagged Although the believers dislike it, Islam, Islamic State. Bookmark the permalink.