Tiananmen Square: The Massacre That Wasn’t 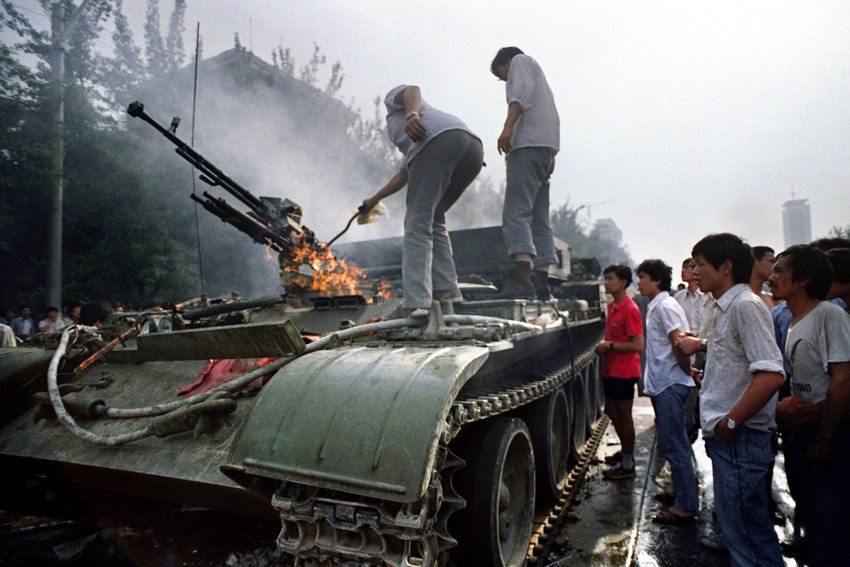 Chinese residents check a burning armoured personnel carrier which was put on fire by rioters on June 4, 1989 near Tiananmen Square in Beijing.

Twenty-five years ago today, every U.S. media outlet, along with then President Bush and the U.S. Congress were whipping up a full scale frenzied hysteria and attack against the Chinese government for what was described as the cold-blooded massacre of many thousands of non-violent “pro-democracy” students who had occupied Tiananmen Square for seven weeks.

The hysteria generated about the Tiananmen Square “massacre” was based on a fictitious narrative about what actually happened when the Chinese government finally cleared the square of protestors on June 4, 1989.

The demonization of China was highly effective. Nearly all sectors of U.S. society, including most of the “left,” accepted the imperialist presentation of what happened.

At the time the Chinese government’s official account of the events was immediately dismissed out of hand as false propaganda. China reported that about 300 people had died in clashes on June 4 and that many of the dead were soldiers of the Peoples Liberation Army. China insisted that there was no massacre of students in Tiananmen Square and in fact the soldiers cleared Tiananmen Square of demonstrators without any shooting.

The Chinese government also asserted that unarmed soldiers who had entered Tiananmen Square in the two days prior to June 4 were set on fire and lynched with their corpses hung from buses. Other soldiers were incinerated when army vehicles were torched with soldiers unable to evacuate and many others were badly beaten by violent mob attacks.

These accounts were true and well documented. It would not be difficult to imagine how violently the Pentagon and U.S. law enforcement agencies would have reacted if the Occupy movement, for instance, had similarly set soldiers and police on fire, taken their weapons and lynched them when the government was attempting to clear them from public spaces.

In an article on June 5, 1989, the Washington Post described how anti-government fighters had been organized into formations of 100-150 people. They were armed with Molotov cocktails and iron clubs, to meet the PLA who were still unarmed in the days prior to June 4.

What happened in China, what took the lives of government opponents and of soldiers on June 4, was not a massacre of peaceful students but a battle between PLA soldiers and armed detachments from the so-called pro-democracy movement.

On one avenue in western Beijing, demonstrators torched an entire military convoy of more than 100 trucks and armored vehicles. Aerial pictures of conflagration and columns of smoke have powerfully bolstered the [Chinese] government’s arguments that the troops were victims, not executioners. Other scenes show soldiers’ corpses and demonstrators stripping automatic rifles off unresisting soldiers,” admitted the Washington Post in a story that was favorable to anti-government opposition on June 12, 1989.

The Wall Street Journal, the leading voice of anti-communism, served as a vociferous cheerleader for the “pro-democracy” movement. Yet, their coverage right after June 4 acknowledged that many “radicalized protesters, some now armed with guns and vehicles commandeered in clashes with the military” were preparing for larger armed struggles. The Wall Street Journal report on the events of June 4 portrays a vivid picture:

As columns of tanks and tens of thousands soldiers approached Tiananmen many troops were set on by angry mobs … [D]ozens of soldiers were pulled from trucks, severely beaten and left for dead. At an intersection west of the square, the body of a young soldier, who had beaten to death, was stripped naked and hung from the side of a bus [view image, very graphic]. Another soldier’s corpse was strung at an intersection east of the square.