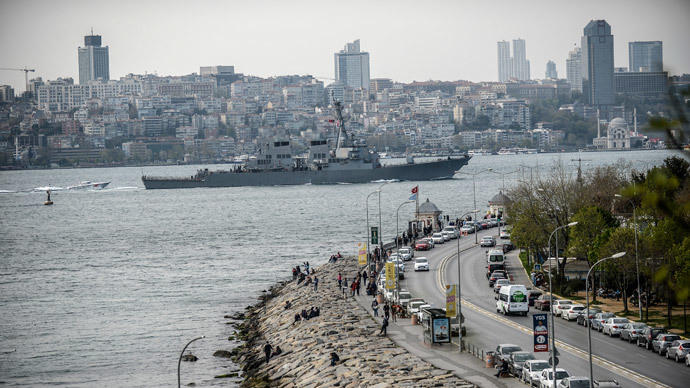 US warship USS Donald-Cook sails through the Bosphorus in Istanbul, Turkey, on April 10, 2014, en route to the Black Sea (AFP Photo / Bulent Kilic)

In February, 1990, US Secretary of State James Baker (1989-1992), representing President George HW Bush, traveled to Moscow to meet with Russian President Mikhail Gorbachev regarding the possible reunification of Germany and the removal of 300,000 Soviet troops. There is little serious dispute that as the Berlin Wall teetered, Baker promised Gorbachev “there would be no extension of NATO’s jurisdiction for forces of NATO one inch to the east.” Gorbachev is reported to have taken the US at its word and responded “any extension of the zone of NATO is unacceptable.” “I agree,” replied Baker.”

Unfortunately, Gorbachev never got it in writing and most historians, at the time, agreed that NATO expansion was “ill conceived, ill-timed, and above all ill-suited to the realities of the post-Cold War world.”

President Bush’s National Security Advisor Brent Scowcroft and Bill Clinton’s Defense Secretary were also in agreement. But by 1994, that verbal contract had not deterred the concerted efforts of a handful of State Department policy professionals to subdue the overwhelming bureaucratic opposition according to James Goldgeier in his classic “Not Whether but When: The US Decision to Enlarge NATO.” By 1997, the Gorbachev-Baker-Bush agreement was a forgotten policy trinket as Hungary, Poland and the Czech Republic were accepted into NATO. In 2004, former Soviet satellite countries Lithuania, Latvia and Estonia were admitted and in 2009, Croatia and Albania joined NATO.

This entry was posted in Imperialism & Colonialism, NWO & Global Governance, War & Terror and tagged NATO, Russia, US. Bookmark the permalink.