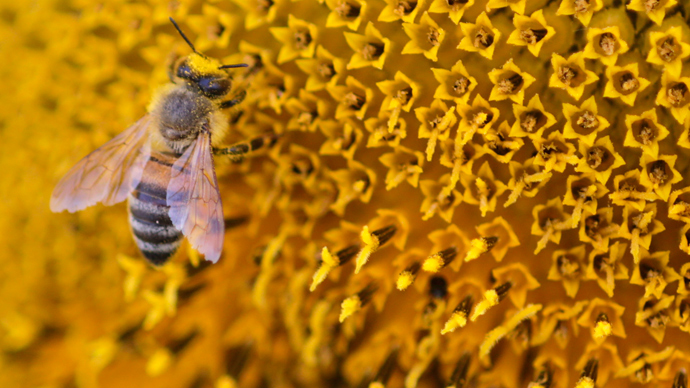 Bees exposed to “field-realistic” doses of insecticides gather less than a half the pollen that they normally do, dooming their young to starvation, UK researches have said. While some scientists hailed the findings, pesticide makers remained unimpressed

In a spin-off of their earlier study, a team of British scientists have revealed how the neurotoxic chemicals contained in agricultural neonicotinoids affect the very basic function of the honeybees – the gathering of pollen, or flower nectar.

“Pollen is the only source of protein that bees have, and it is vital for rearing their young. Collecting it is fiddly, slow work for the bees and intoxicated bees become much worse at it. Without much pollen, nests will inevitably struggle,” explained University of Sussex professor Dave Goulson, who has led the study. His comments were made in a statement released alongside the research.

The scientists exposed some of the studied bees to low doses of imidacloprid and tracked their movement with the help of electronic tags. Unexposed bees were also tracked, and each insect flying out and returning to a hive was weighed to find out the amount of pollen it gathered.

It turned out that bees exposed to the neonicotinoid brought back pollen from only 40 percent of their trips asopposed to 63 percent of useful trips which their “healthy” counterparts undertook. Intoxicated bees cut the amount of pollen gathered by nearly a third – overall, the comparative study showed that the hives exposed to the pesticide received 57 percent less pollen.

See also: Queen of the Sun: What Are the Bees Telling Us?

This entry was posted in Nature & Environment and tagged bees, pesticides. Bookmark the permalink.