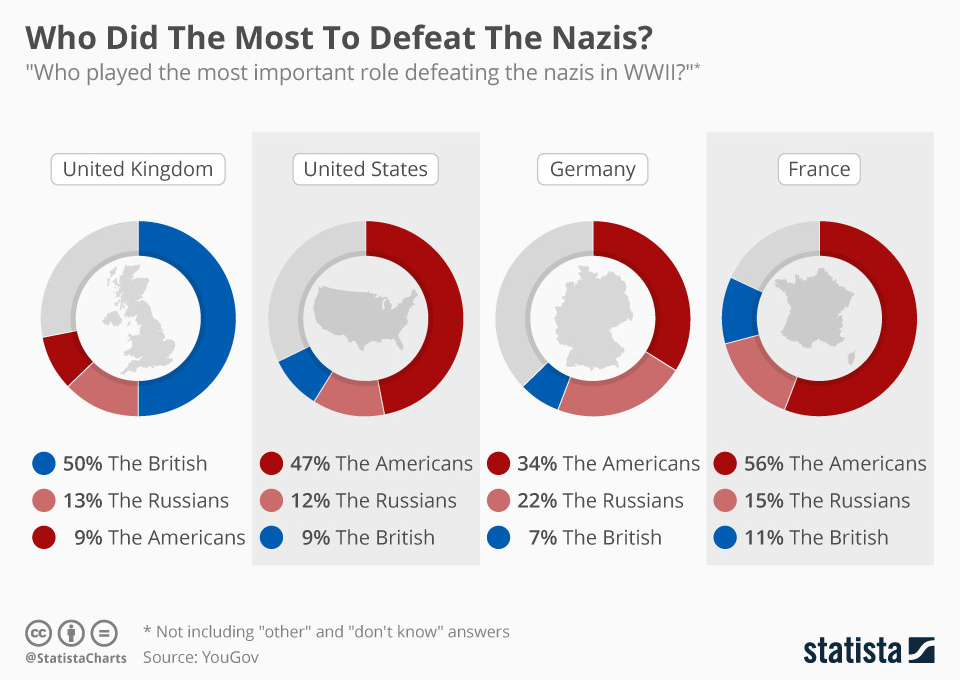 Due to decades of Hollywood propaganda, many people in Western countries believe that the U.S. did the most to defeat the Nazis during World War II. Nothing could be further from the truth.

The President of Russia Vladimir Putin has taken the opportunity of the 75th anniversary of the end of World War II to describe the build-up to the war, the diplomatic and military considerations Russia took into account during that time, and the results of the allies’ victory:

75th Anniversary of the Great Victory: Shared Responsibility to History and our Future

The Soviet Union and the Red Army, no matter what anyone is trying to prove today, made the main and crucial contribution to the defeat of Nazism.
…
This is a report of February 1945 on reparation from Germany by the Allied Commission on Reparations headed by Ivan Maisky. The Commission’s task was to define a formula according to which defeated Germany would have to pay for the damages sustained by the victor powers. The Commission concluded that “the number of soldier-days spent by Germany on the Soviet front is at least 10 times higher than on all other allied fronts. The Soviet front also had to handle four-fifths of German tanks and about two-thirds of German aircraft.” On the whole, the USSR accounted for about 75 percent of all military efforts undertaken by the Anti-Hitler Coalition. During the war period, the Red Army “ground up” 626 divisions of the Axis states, of which 508 were German.

On April 28, 1942, Franklin D. Roosevelt said in his address to the American nation: “These Russian forces have destroyed and are destroying more armed power of our enemies – troops, planes, tanks, and guns – than all the other United Nations put together.” Winston Churchill in his message to Joseph Stalin of September 27, 1944, wrote that “it is the Russian army that tore the guts out of the German military machine…”

Such an assessment has resonated throughout the world. Because these words are the great truth, which no one doubted then. Almost 27 million Soviet citizens lost their lives on the fronts, in German prisons, starved to death and were bombed, died in ghettos and furnaces of the Nazi death camps. The USSR lost one in seven of its citizens, the UK lost one in 127, and the USA lost one in 320.

Read the full article: 75th Anniversary of the Great Victory: Shared Responsibility to History and our Future