There is No Future for Apartheid Israel 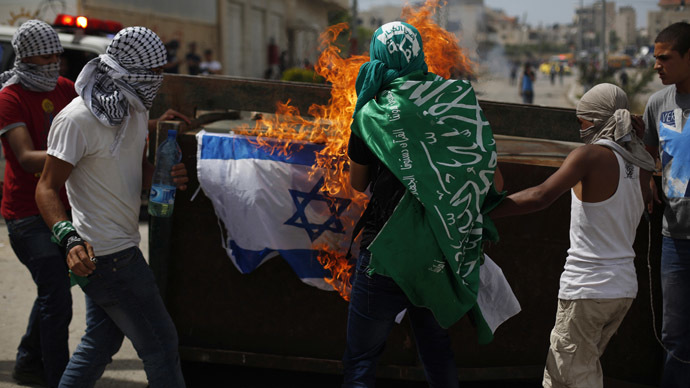 Palestinian protesters burn an Israeli flag during clashes with Israeli troops near Israel’s Ofer Prison, near the West Bank city of Ramallah May 16, 2014. (Reuters/Mohamad Torokman)

Most empires and colonial projects fall under the weight of their own contradictions, but usually over a protracted period of resistance, both passive and active, on the part of its victims. At the same time the material privileges gained from the exploitation and expropriation of a colonized people acts as a slow-acting corrosive on the society of the colonizing state, poisoning it with racism and hatred for those it has colonized as it seeks to justify the material privileges and psychological sense of supremacy and national pride that accrues from that colonization. This moral decay is commonly reflected in the degeneration that takes place in the armed forces of the state in question, where the emphasis of the troops shifts from self-sacrifice and heroism in support of a just and galvanizing cause to personal survival as demoralization sets in.

The romantic ideals attached to the pioneering spirit of the founders of Israel, along with international sympathy for a people who’d suffered such grotesque brutality at the hands of the Nazis, imbued the nascent state with a sense of purpose and destiny that helped mask the atrocities being carried out in its name.

A mythology of heroism and bravery was already well on the way to being constructed in 1948 when it came to Zionist militia organizations like the Haganah and Irgun. It was a mythology that continued on into the ranks of IDF when Israel was founded in 1948, embodied in the adoption of the state’s guiding “purity of arms” ethos, one designed to give romantic flavor to the militarism that sits at its heart. Yet in truth the ranks of the Haganah, Irgun and various other militia groups were filled with racist killers massacring men, women and children in order to fulfill the biblical and national destinies previously mentioned.

This toxic mix of racism and exceptionalism has led to the existence of a state that since its formation has viewed its repeated violations of international law and its crimes against humanity entirely justified. So deeply ingrained is the biblical and historical justification for Israel’s continued depredations against the Palestinians that when it comes to international condemnation of its crimes, rather than a cause for reflection and introspection within Israeli society, for many it merely serves to reaffirm Israel’s view of itself as the last bastion of defense of the Jewish people in a hostile world.

The day-to-day reality of this corrosive outlook involves young Israeli soldiers, mostly conscripts, humiliating, intimidating and brutalizing civilians at checkpoints, or killing Palestinians and Arabs in general in the knowledge they are able to do so with relative impunity.

But when those same soldiers come up against a determined and dogged resistance on the ground, such as they did in 2006 during the brief war against Hezbollah in southern Lebanon, their resolve crumbles and they are defeated. This is key to understanding why Israel, just like its chief sponsor the US when it comes to its own military operations, has come to rely on an advanced arsenal of missiles, aircraft, helicopter gunships, drones and tanks in its continuing conflict with the entire population of Gaza for the crime of exercising its right to elect a government of its own choosing.

Such would be the demoralizing effect not only on the troops but also and more importantly on Israeli society at large. Israel knows it cannot afford to sustain heavy casualties during its repeated military operations against a largely unarmed population.

Israel as an apartheid state has no future. Only as a state which embraces the concept of universal human rights, justice and dignity for all who share the same land can it ensure the peace and security of its people. More than any other this is the abiding lesson of history.