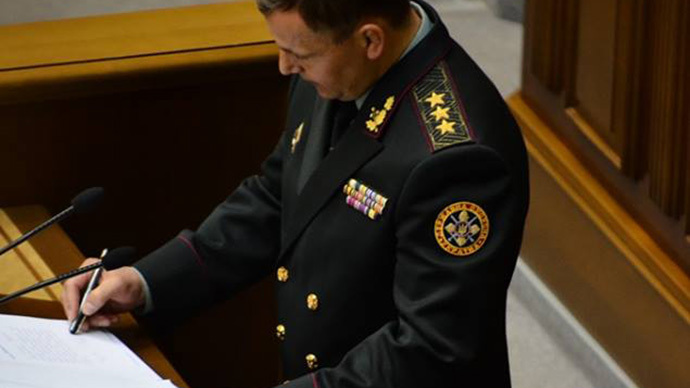 Ukraine’s newly appointed Defense Minister was so fast to sign his oath of allegiance that even the capped pen in his hand failed to slow him down.

The candidacy of Lieutenant-General Valery Geletey, which was proposed by Ukrainian President Petro Poroshenko, received support from the majority of the MPs in the country’s parliament, the Verkhovna Rada, on Thursday.

He got 260 votes from the deputies, above the minimum of 226 votes required to be accepted for the job.

Geletey came up on stage and read out the text of the oath of allegiance as the new defense minister.

He then signed the document with one swift flourish, accompanied by applause from the parliamentarians.

The video footage showed nothing suspicious as Geletey’s hands were hidden by the rostrum. However, photos made by correspondents from another angle revealed that the pen he used was capped.

After the oath, Geletey addressed the parliament with a speech promising to “ensure peace and order” and “restore the sovereignty and territorial integrity” of Ukraine.

“I’m confident that Ukraine will prevail and, believe me, there’ll be a victory parade in the Ukrainian city of Sevastopol,” he declared.

This entry was posted in War & Terror and tagged Ukraine, Valery Geletey. Bookmark the permalink.